Department of Aeronautics and Astronautics, Faculty of Engineering

Department of Aeronautics and Astronautics, Graduate School of Engineering

Department of Aeronautics and Astronautics, School of Engineering

Our current research is focused on experimental elucidation of unsettled problems about heat transfer and fluid mechanics, especially nanometer-order heat and mass transport problems, by means of MEMS technology, laser and advanced microscopies. For example, the thermal conductivity of individual nanomaterials of sub-100nm size can be measured by the sensors fabricated in our lab, and the interfacial thermal resistance between nanomaterials and the substrate is being measured by the Raman spectroscopy method. For solid materials, it has been known that the physical properties change drastically when the size is shrunk to nanometer order, which is also true for fluids. As for fluid-related problems, we have been investigating on the physical mechanism of nano-sized bubbles (nanobubbles). Besides, we are also very interested in the unsolved issue of the interaction between nanomaterials and fluids. By understanding and utilizing these heat and flow phenomena at the nanoscale, we aim to create knowledge for significantly improving the performance and reliability of systems and devices including aerospace vehicles. 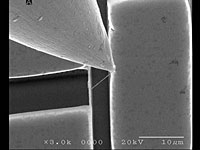