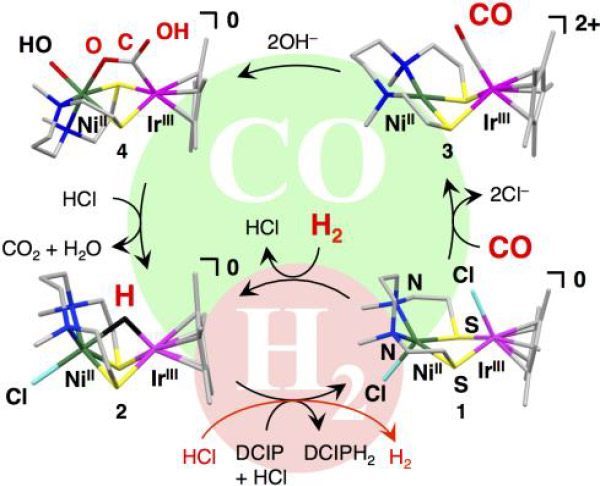 (Figure)
We developed a fuel cell that uses the anode catalyst and a 50:50 mixture of hydrogen and carbon monoxide gases as fuel.

Scientists from Kyushu University, Japan, have invented the first catalyst that can oxidize both hydrogen and carbon monoxide. Carbon monoxide is a common pollutant in commercially available hydrogen gas and it significantly reduces the activity of catalyst by poisoning the platinum catalysts used in today's fuel cells. However, this new catalyst, based on a nickel-iridium complex, was designed to act like the mid-point between two natural enzymes: hydrogenase, which oxidizes hydrogen and carbon monoxide dehydrogenase, which oxidizes carbon monoxide. The group of scientists, led by Prof. Seiji Ogo, were then able to construct a proof-of-concept fuel cell that turned the tables on poisonous carbon monoxide and used it as a fuel and generated energy from a 50:50 mixture of the two gases.

This research achievement was published in the online edition of the German academic magazine Angewandte Chemie International Edition on June 6, 2017 (Japan local time). This research has been carried out as part of the research sponsored by the Ministry of Education, Culture, Sports, Science and Technology (MEXT) Grant-in-Aid for Specially Promoted Research, "New Energy Sources from Hydrogenase-Photosynthesis Models," by Prof. Seiji Ogo and his research group at the Center for Small Molecule Energy (Seiji Ogo, head of the center), Faculty of Engineering, Kyushu University, as well as the International Institute for Carbon-Neutral Energy Research (I2CNER, Petros Sofronis, director of the institute), base of the World Premier International Research Center Initiative (WPI) established by MEXT, JNC Corporation, and Fukuoka Industry-Academia Symphonicity.

Many inorganic metal oxides exhibit excellent catalytic activities for energy conversion reactions such as oxygen reduction reaction, oxygen evolution reaction, hydrogen evolution reaction, etc. However, in many cases, metal oxides cannot serve as good catalysts by themselves because they usually do not possess sufficient specific area and electrical conductivity. As a result, carbon nanotubes (CNTs), which have high electrical conductivity and large surface area are used as the support for the metal oxides. Pristine multi-walled carbon nanotubes (MWNTs) are in lack of binding sites on their surfaces. Therefore, the common method is to create defects on the surfaces of MWNTs using oxidizing treatment prior to hybridizing with metal oxides. Such a pretreatment will obviously damage the graphitic surface of the CNT and thus decreases their electrical conductivity and stability of the catalyst. In the present study, pristine MWNTs were wrapped by pyridine-based polybenzimidazole (PyPBI), in which uniform NixCo3-xO4 nanocrystals were homogeneously deposited by the solvothermal method(*1) without damaging the MWNTs for the first time.

The obtained catalyst (MWNT-PyPBI-NixCo3-xO4) outperformed most state-of-the-art non-precious metal-based bifunctional catalysts. Additionally, this strategy for preparing the hybrid catalyst of NixCo3-xO4 and pristine MWNTs provides an easy scalability, and can be applicable to other transition metal oxides, for example, perovskites with high oxygen evolution reaction activity but low electrical conductivity. Such studies are currently being conducted in our laboratory.

Message from the researcher
Carbon nanotubes, polymer, and inorganic metal oxides belong to very different scientific fields. When they are combined together, something new is created. That is why interdisciplinary studies are charming and important.

Superalloy known as a typical hard-to-deform material was successfully modified to be an easy-to-deform material with a new processing technique developed by a research group of Zenji Horita, a professor of Kyushu University, Fukuoka, Japan. Collaborating with Nagano Forging Co., Ltd. in Nagano city, Prof. Horita reported that it is now possible to enhance the formability of the Ni-based superalloy which is used as a high-temperature heat resistant and good corrosion resistant alloy. Because the alloy has higher strength than forming tool at elevated temperature as well as low temperature, the improvement of the formability to required shapes has been an important subject for the industry providing automotive engine parts. This problem was solved by microstructural refinement to the nanometer levels using a technique of severe plastic deformation under high pressure, called High-Pressure Sliding (HPS).

The collaborating project between Kyushu University and Nagano Forging Co., Ltd. started three years ago, in 2013, receiving a support by subsidies for promoting manufacturing technology of small and medium enterprises from the Ministry of Economy, Trade and Industry (METI), Japan. The HPS process developed by the collaboration is useful not only to Ni-based superalloys but also to many light-weight metals like high-strength aluminum and titanium alloys and less ductile magnesium alloys. Prof. Horita says the HPS process should be a convenient tool to alter hard alloys to soft alloys when the formability is required to the alloys. He is sure that the new processing technology will contribute to saving energy and lower emission of carbon dioxides. 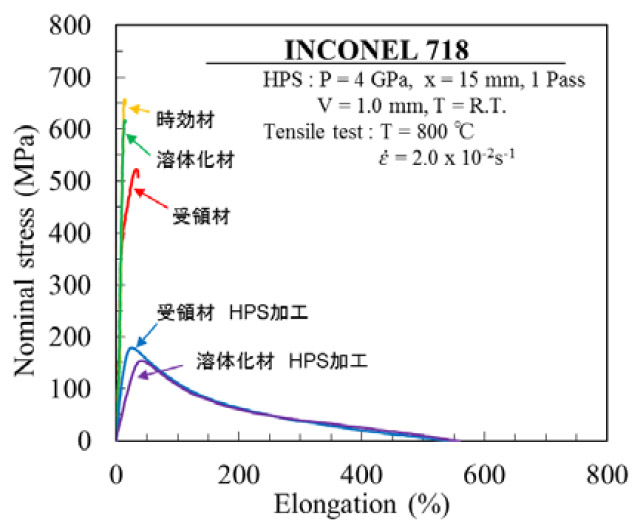