We have been studying advanced applications of high-energy particles (e.g. neutrons, muons, and so on) in interdisciplinary fields between particle & nuclear physics and medicine & engineering. Examples of specific research subjects are as follows:

(1) Application of nuclear physics to medical isotopes production and nuclear transmutation of long-lived fission products (LLFPs) in nuclear waste.
Applications of radioisotopes (RIs) are widely used in both diagnosis and therapy in medicine. The status of these applications has recently been reaching to next stage, based on the development of innovative drug delivery system (DDS). We are developing a novel production method of various RIs which cannot be produced efficiently by conventional methods, by using “accelerator neutron”.
In the sustainable use of nuclear energy, the management of radioactive waste from spent fuel has been one of the crucial issues. We are interested in reduction and resource recycling of LLFPs having a very long half-life (e.g., Zr-93) through accelerator-based “nuclear transmutation”. Toward the realization of future nuclear transmutation, we focus on proton- or deuteron-induced spallation reaction and are studying the reaction mechanism in both experimental and theoretical ways.

(2) Studies related to cosmic-ray muons
We are interested in a novel technique using cosmic-ray muons coming from space to the ground, which is called “muography”. The muography is a fluorography technique that can be applied to large scale objects such as volcano and pyramid. We are developing a new type of portable muography detector which is dedicated to exploit small scaled infrastructure buildings (incinerator, dam, plant, underground cavity, and so on) for operation and maintenance.
In advanced information society, it becomes important to guarantee the reliability of the information systems supported by a huge number of semiconductor devices. We are addressing the problem of “soft errors” (a transient malfunction) in electronic devices subjected to terrestrial radiation environment including cosmic-ray muons. Based on nuclear and radiation physics, we are studying the physical mechanism by both experiment and simulation to establish a reliable prediction method of soft error rates. 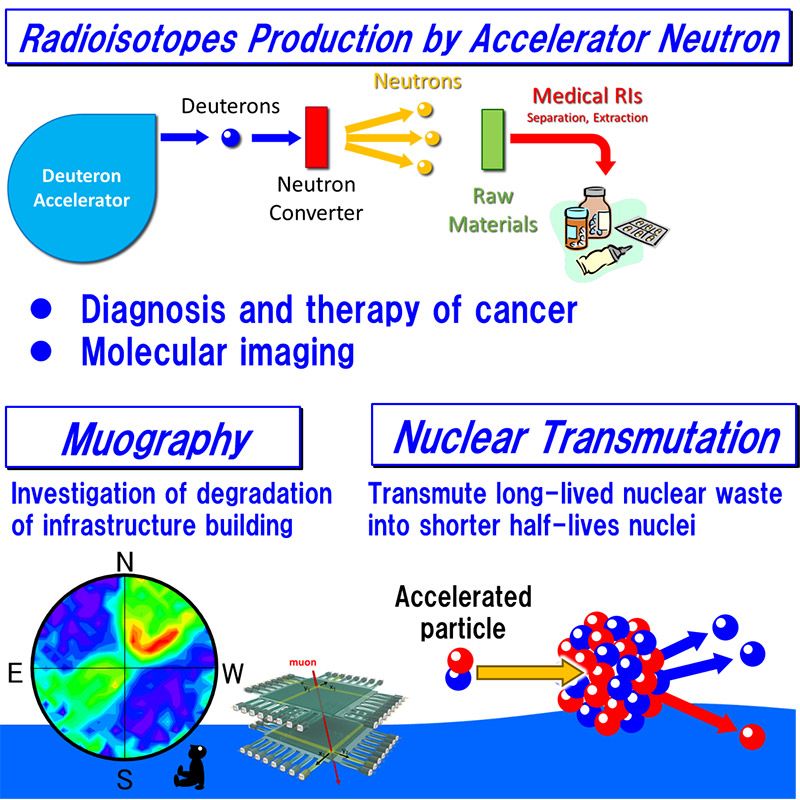