Condensed matter physics deals with the physical properties of condensed phases of matter such as solids and liquids. A lot of exotic properties due to the quantum effect have been found in condensed phases at low temperatures, since the thermal de Broglie wave length is larger than the order of the interparticle distance. We study a variety of topics related to condensed matter at very low temperatures using dilution refrigerator. Our current subjects are as follows; (1) Quadrupolar Kondo effect and quadrupolar ordering in non-magnetic Gamma3 systems (2) Bose-Einstein condensation in quantum spin systems (3) Quantum effects in atomic scale contacts and single molecule. 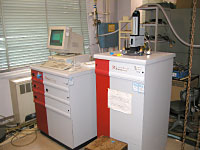 SQUID magnetometer (Quantum Design Inc.). The precise magnetization measurements down to the temperature T~500mK and up to the magnetic field H=7 T are available by using a home-made 3He insert.